Sperone Westwater is pleased to present an exhibition of new work by renowned artist and poet John Giorno, his first with the gallery.

Giorno’s outsized influence as a poet stems from the expansive and multidisciplinary nature of his work. From his studio on the Bowery, where he has lived and worked for over fifty years, Giorno’s practice has grown beyond poetry to encompass film, painting, sound installation and much more. He began staging multimedia events alongside Andy Warhol’s Exploding Plastic Inevitable in the 1960s, when he also worked with Robert Rauschenberg’s Experiments in Art and Technology (E.A.T) (1966) and with Bob Moog (1967-68). An early pioneer of recorded spoken word projects, he founded the nonprofit Giorno Poetry Systems in 1965, which has produced albums with hundreds of artists and poets. Giorno is best known for his interactive telephone work “Dial-A-Poem,” first presented in 1968, which invited people to call into a dedicated line to hear poems from live recordings by Laurie Anderson, John Ashbery, Frank O’Hara and numerous others. Included in Kynaston McShine’s watershed exhibition “Information” at the Museum of Modern Art in 1970, “Dial-A-Poem” has gone on to several subsequent influential iterations in both analog and digital worlds.

Giorno’s earliest silkscreened works, first exhibited around this time, reconcile Buddhist spiritual texts with a Pop sensibility. His well-known text paintings of recent decades, executed in the trademark font Mark Michaelson developed for him in 1984, feature curt and contradictory messages excerpted from his poetry—imperative, deadpan, sacred, profane. The exhibition will include the largest paintings Giorno has yet made, four-part compositions each measuring nearly ten feet square, with phrases such as “DO THE UNDONE” suspended on silkscreened rainbow backgrounds. Upstairs is a suite of watercolors in pale blue, registering the traces of the artist’s hand, weightless in contrast to the crisp perfection of the paintings.

For the first time in the United States, Giorno will present three new sculptures, found bluestone boulders into which poetic phrases are carved. Similar works were shown in 2017 at the Château de Versailles outside Paris as part of “Voyage d’hiver,” an exhibition organized by the Palais de Tokyo. With their ironic clash of immaterial language and solid substance, these “stone poems” play with issues of transience and permanence, the text fragments appearing as chance apparitions.

For press inquiries, please contact Natasha Wolff at +1 212 999 7337, or natasha@speronewestwater.com. 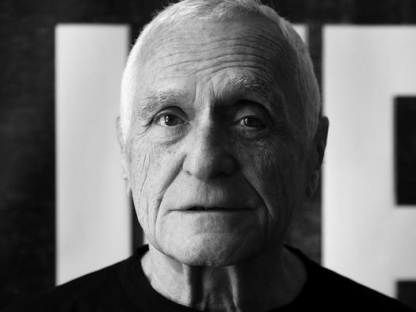