From ZERO’s inception in 1957, Piene’s exploration of light centered on his use of the raster screen. The series began with Piene’s development of the technique in which he pressed oil paint through cardboard and metal screens onto paper and canvas. Using screens he made in 1957, Piene returned repeatedly to the Rasterbilder over a period of nearly sixty years, expanding the technique into new areas of his research, including light objects and installations, and finally ceramics.

Between 2006 and his death in 2014, Otto Piene created ceramic works he referred to as “heavy images” in the renowned Cologne studio of Niels Dietrich, which he considered a direct extension of his work on canvas and paper. Made by pressing special metallic glazes through raster screens onto clay before firing, Piene’s ceramics explicitly referenced some of his earliest raster paintings in gold and silver paint, broadening the palette of light refraction.

The medium also enabled a more physical relationship to the work, as evidenced by gauging and scraping in some, while the firing process, which enabled the artist to cultivate chance surface effects such as oxidation, paralleled Piene’s risk-taking early work with fire. Moving as they do beyond traditional notions of ceramics and their place in advanced art practice, works from this productive late period bring Piene’s project full circle. Summarizing a life’s research, their technical innovation imparted new dimensionality to Piene’s longstanding formal and material concerns and underscored his desire for his work to be both intensely optical and tactile.

Otto Piene was born in 1928 in Bad Laasphe, Germany. From 1949 to 1953, he studied painting and art education at the Academy of Art in Munich and the Kunstakademie Düsseldorf, and in 1957, he received a degree in philosophy from the University of Cologne. Piene moved to the United States in 1964. From 1968 to 1971, he was the first Fellow of the MIT Center for Advanced Visual Studies (a cross-disciplinary venture that fostered collaboration among artists, scientists, and engineers), where he ultimately became director in 1974. A recent survey of his work was held at the Arp Museum Bahnhof Rolandseck (2019-20). His work can be found in more than 100 public collections worldwide, including Albright-Knox Art Gallery, Buffalo; Art Institute of Chicago; Centre Pompidou, Paris; The Metropolitan Museum of Art, New York; The Museum of Modern Art, New York; Neue Nationalgalerie, Staatliche Museen zu Berlin; the Philadelphia Museum of Art; Stedelijk Museum, Amsterdam; Van Abbemuseum, Eindhoven; and Walker Art Center, Minneapolis. Piene divided his time between studios in Groton, Massachusetts, and Düsseldorf until his death in 2014. Piene’s first solo exhibition at Sperone Westwater was in 2010, followed by a retrospective exhibition in 2016.

For press inquiries, contact Natasha Wolff at +1 212 999 7337 or natasha@speronewestwater.com. 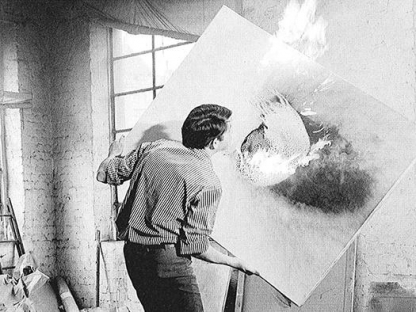